I posted a few days ago about declining public trust in societal institutions (including the courts, the presidency, big business, the military, the church, etc.)  By coincidence, Nate Silver has a post today that touches on the same subject.  He reports that Democrats tend to have more trust institutions these days than Republicans.  Moreover, Republican trust has been trending strongly downward, as shown by the following chart: 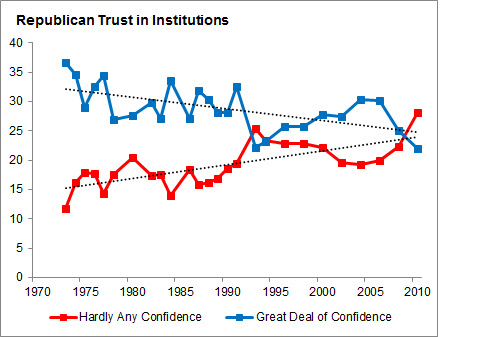 Note that we’re not just talking about the federal government here.  Republicans on the whole have a strong distrust of institutions in general.  As Silver says, this makes the GOP collectively very anti-establishment.

Institutions are the way we take on projects that are too big for any one individual, which includes many projects that affect the public generally, such as control of pollution.  People who distrust institutions are likely to disfavor collective efforts to address these problems, but instead to rely on individual self-help to address problems: if the air is polluted, move farther away from the city.  (Similarly, if you’re worried about crime, don’t increase support for your local police; buy a gun instead.) Thus, the increasing Republican antipathy toward environmental protection seems understandable in terms of these trends.