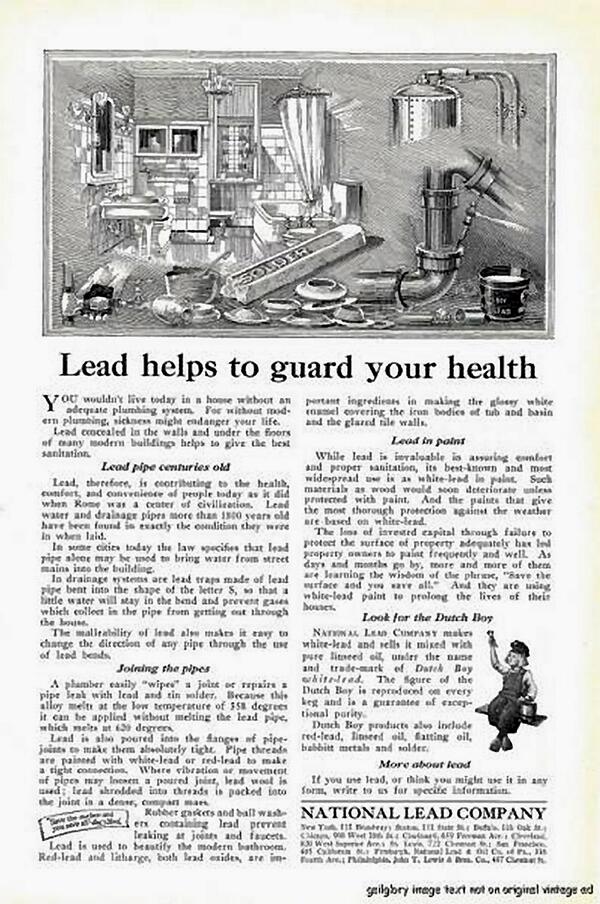 At this point, you would need to be a hermit to have missed the news coverage of elevated levels of lead in the drinking water in Flint, MI. (Although even that might not be a valid excuse given an ancient, anonymous Roman hermit described lead poisoning).

The short version is: in April 2014 a cash strapped Flint switched from using Detroit’s water to piping water from the Flint River.  The water from the Flint River was highly corrosive, wasn’t treated properly, and as it traveled from the treatment plant to homes and businesses in Flint it corroded lead pipes and carried that lead through the taps of Flint’s residents.  An astute pediatrician began noticing higher levels of lead in children, and eventually the city, state and federal governments began to acknowledge there was a problem.  Reporting has turned to questions of accountability.

Let’s be clear, it is bad that people in Flint, especially children, were exposed to lead.  It is fair to ask why this happened in a predominantly African American community.  It is reasonable to expect accountability from the regulators who are tasked with preventing this kind of exposure from happening.  There are environmental justice organizations and media outlets pushing those issues forward.

Instead, I think its interesting to focus on three issues that highlight our successes and failures in environmental regulation, the first two of which are seemingly contradictory:

1.  The fact that these lead levels make national news is an environmental health victory.  Despite this crisis, there is still far less lead exposure than there was just a few decades ago.  In fact, you, dear reader, likely had a blood lead content higher than most of the children in Flint when you were a child.

(For those reading this in email, you can see the relevant graph of childhood blood lead levels here).  In 1976-1980, 88% of children aged 1-5 had blood lead levels above 10 ug/dL–twice the current level of concern that is being applied to the Flint crisis.  While the issue is complicated, we can assume an decrease of about 1.22 IQ points for every 1 ug/dL increase in blood lead levels. (If you’re feeling masochistic, go ahead and take a second to calculate roughly what your estimated decrease in IQ is assuming median exposure for your childhood using the graph.)

The current level of concern is 5 ug/dL, and only about 2.5% of American children reach that level.  In fact, based on the numbers crunched by the Detroit Free Press, even with the elevated levels from the water switch, the 2014-2015 levels are still lower than the 2010-2012 levels:

This is not to say it shouldn’t make news, it should, in particular since CDC statistics show that African American children have higher blood lead levels than their white and Hispanic peers.  There is no known safe level of lead for children.

Still, the fact that lead levels are so much lower for everyone is an environmental and public health victory worth savoring.  There was an environmental health problem, and the EPA was able to drastically improve it by regulating lead air levels under the Clean Air Act.  That’s not to say it was easy to do; when have more stringent environmental regulations been universally welcomed?  But in the end, the science about the detrimental effects of lead prevailed, and as a result almost all kids today are exposed to less lead than their parents.  Experts believe this resulted in enormous societal benefits.

2.  Lead use in the U.S. has actually gone up during most of the period when blood lead concentrations were dropping.  Yes, we’ve gotten lead out of gas, paint, and pipes, but it turns out we’ve still been using a lot of it for lead acid batteries.  The USGS data for lead use only goes until 2003, but it shows that lead use for batteries had been outstripping lead use for gasoline by an order of magnitude long before the gas lead ban took affect.  This paper labels lead as a “growth” chemical, and provides this handy graph to prove it:

As someone who generally favors selecting safer alternatives rather than controlling exposure to toxic ones, I must admit we seem to be doing a decent job of controlling exposure to the lead in all those lead acid batteries.  However, the locations that manufacture and recycle those batteries still bear an enormous environmental burden, just ask the residents around the Exide factory in Vernon.

3.  Everyone struggles to reduce lead exposure.  The treatments of different products containing lead is a study in how economic and political considerations impact regulation, even when we know the substance at issue is really bad for us.  Comparing European and U.S. efforts illustrates this.

Lead has been used in many products over the millennia, and the first recorded human use of lead corresponds closely with the first recorded incidence of lead poisoning.  The point is, there’s no notice problem here, although our understanding of the deleterious health effects of lead have deepened over the centuries.  We’ve known for millennia that lead is a human health hazard.  It turns out, we’ve known for just as long that it’s a pretty useful substance, and we’ve had a hard time letting it go.  Here are the big lead abatement efforts of the last century:

Paint: point for Europe.  Childhood lead poisoning was linked to lead paints in 1904.  France, Belgium and Austria banned white-lead paint in 1909.  The National Lead Company admitted lead was a poison in 1921.  The League of Nations banned white-lead interior paint in 1922 (you know an environmental regulation is old if it was issued by the League of Nations), but the U.S. declined to implement the ban.  Instead, the U.S. waited nearly half a century (1971) to pass the Lead Poisoning Prevention Act (42 U.S.C. 4822), although some local jurisdictions started banning it as early as the 1950s.  The ban on lead paint was fully implemented in the U.S. 1978, 74 years after childhood lead poisoning was linked to lead paints.

Gasoline additive: point for the U.S., but only begrudgingly.  Putting lead in gasoline was a public health failure.  In 1921 Thomas Midgley discovered that tetraethyl lead (TEL) reduced engine knock (and in 1923 he became extremely ill from lead poisoning).  In 1923 (i.e. a year after the League of Nations lead paint ban), DuPont started making TEL on an industrial scale, and in 1924 five workers died from lead poisoning at DuPont’s New Jersey TEL manufacturing facility.  In 1925, sales of TEL were suspended while the Surgeon General reviewed its safety (hint: it’s not safe), but the following year an industry-dominated committee approved its use and sales immediately resumed.  It wasn’t until nearly 40 years later that any regulatory headway was made.  In 1973 the EPA released a report that found lead from automobile exhaust was causing a direct threat to public health, and shortly thereafter released regulations calling for the gradual reduction of lead in fuel under the 1970 Clean Air Act Amendments.  This met with some hurdles.  This Rolling Stone article from 1984 summarizes how the Reagan administration tried to avoid stricter regulations on lead in gasoline at the request of industry.  But the primary phase out was completed in 1986, and by 1991 the ban was complete.  In 2008, the EPA reduced the lead air standard by another order of magnitude.

The European Union, meanwhile, didn’t succeed in banning lead in gasoline until 2000.  Their delay stemmed largely from objections from Mediterranean countries whose outdated refineries weren’t equipped for reformulation.  In other words financial interests expressed through a political process trumped public health concerns.

Pipes: The word plumbing is derived from the Latin word for lead because it was used in pipes even in ancient times.  Much of the U.S. water infrastructure includes lead pipes.  In 1986 Congress enacted the Safe Drinking Water Act Amendments (PL 99-339), which banned the use of lead in pipe or solder in public drinking systems and VA or HUD insured or assisted property.  The ban also applied to plumbing installation or repair that connected to public water systems.  Some homes from before this time have lead pipes or lead solder connecting copper pipes.  Because of it’s ubiquity, protection from lead in water relies on frequent testing and management, mostly through the use of anti-corrosive chemicals.  The EPA estimates it will take over $275 billion to upgrade all American plumbing systems to make them lead-free.

Europe is also a mixed bag.  In 1980 the EU’s Drinking Water Directive set the maximum level of lead in drinking water at 50ug/L; in 1998 voted to decrease that to 10ug/L, although compliance was delayed until late 2013.  Germany provides an instructive example.  Most areas of southern Germany banned the use of lead in pipes over a century ago, but northern locales didn’t do so until the 1970s.

In this sense, the efforts to control lead exposure are a microcosm of environmental regulation generally.  We struggle to regulate chemicals and actions that are harmful to human health and/or the environment, but are useful.  The situation in Flint is giving us a highly local insight on the cost of failure.