Every year, Californians send about 30 million tons of trash to landfills. While the state’s residents do their part to reduce, reuse and recycle, that’s still a whole lot of garbage. It’s not only a land use issue, it’s a climate change issue: as landfill waste decays, it emits methane, a powerful greenhouse gas. 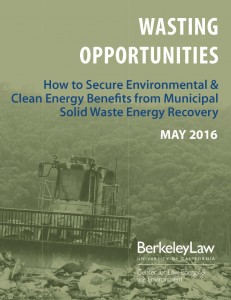 Many other countries and states are using energy recovery technologies to turn that trash into power. Mostly it’s done by heating and gasifying the material, using more advanced and cleaner technologies to recover energy from this solid waste. California has three such facilities in operation. But since the 1980s we’ve essentially not allowed any new ones to be built, out of concern for local pollution impacts, particularly on low-income communities of color.

But as the energy recovery technology improves and the state grapples with its needs both to reduce greenhouse gas emissions and find non-fossil fuel-based sources of energy, waste-to-energy has emerged as an important issue in the Capitol recently.

To that end, Berkeley Law’s Center for Law, Energy and the Environment (CLEE) convened a group of environmental advocates, waste-to-energy technology developers, and state and local officials to discuss prospects for moving forward on this issue.

The concerns are significant: will the technologies adversely impact nearby communities, many of which may be disproportionately low-income and of color? Will energy recovery incentives discourage recycling? How reliable are these new technologies in reducing local emissions?

Based on that discussion, CLEE is today releasing the report Wasted Opportunities: How to Secure Environmental & Clean Energy Benefits From Municipal Solid Waste Energy Recovery, which I co-authored with Daniel Gergely Szabo.  It recommends solutions for the state to address this challenge, including:

Ultimately, should decision-makers identify appropriate technologies to deploy, the state will need a discussion on land-use siting to ensure that environmental justice concerns are addressed. While that process is not the subject of this report, it would be a worthwhile second step in contemplating these technologies.

You can read more on the report page here. In addition, I will be hosting a radio show discussion on this topic tonight at 7pm on San Francisco’s KALW radio 91.7 FM, a local NPR affiliate, for the show City Visions. My guests include:

For those not in the area, you can tune in via the website, either live or afterwards when the audio is posted.