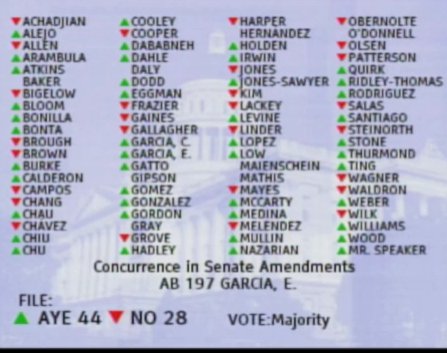 There was a bit of added drama to the passing of SB 32 yesterday in the California Assembly, as the passage was dependent on the state enacting AB 197. The Assembly debated AB 197 this morning, and it passed out of the natural resources committee with six votes in favor and one opposed. It then headed to the assembly floor where it just passed 44 votes in favor, 28 opposed.  The governor has vowed to sign it.

As Ann described last night, AB 197 restricts some of the California Air Resources Board’s independence to implement the 2030 law by giving the legislature more oversight. It also adds in a requirement that all regulations under SB 32 must include a “social cost” accounting and that the Air Resources Board essentially prioritize more command-and-control-type regulations on specific sources.

The irony is that the oil and gas industry fought attempts in the legislature to save cap-and-trade with a two-thirds vote.  Cap-and-trade is a more palatable market-based alternative for the industry, compared to direct regulation.  Now the industry is stuck with a majority-vote command-and-control approach.

So it’s no surprise that industry representatives today argued against AB 197 in committee this morning by saying it would undermine cap-and-trade.  The industry now has an incentive to try to re-authorize cap-and-trade next year by legislative vote as an alternative to direct regulation.  That could make 2017 a big year for that program in the legislature.

In the end, cap-and-trade is just one means to achieving our state’s climate goals, and there are other ways to get there.  Command-and-control may be more effective at guaranteeing actual emissions reductions at sources, since much of cap-and-trade’s effectiveness is a bit of a black box given industry’s privacy concerns.  The downside with this approach though is the potential for greater costs for industry than a market-based program, which could get passed on to consumers.  And for environmentalists, these site-specific regulations don’t generate auction proceeds like cap-and-trade, which the state is now relying on to fund a host of programs, from high speed rail to low-income housing near transit.

So given the political momentum, my guess is that diverse parties now have an incentive to save cap-and-trade.  But in the meantime, California has affirmed its international-leading commitment to stay the course on greenhouse gas reductions through 2030.