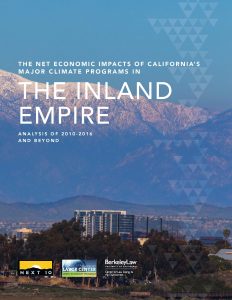 Together with UC Berkeley’s Center for Labor Research and Education, and working with the nonpartisan nonprofit Next 10, the study found that between 2010 to 2016 the Inland Empire received:

Join the report authors as we discuss our findings on a webinar next Tuesday. We’ll cover the impact of cap and trade, the renewables portfolio standard, distributed solar policies and energy efficiency programs and their effects on the Inland Empire’s economy to date and going forward, as well as what these findings mean for other regions of the state and beyond.

In addition to yours truly, the webinar will feature:

The webinar will run from 10 to 11am on Tuesday, September 12th. Register now to join the discussion!