Here are some cool images from earth satellites.  Fans of Benoit Mandelbrot may detect a fractal quality to many of them.

The subject of this particular photo ois the Namib-Naukluft National Park, which includes  Namibia’s Namib Desert. Here, southwest winds have created the tallest sand dunes in the world, with some dunes reaching 300 meters in height. Despite the lack of water, the park’s denizens include oryx, hyenas, jackals, and springbok.

As primates, humans are very visually oriented. Images like these can help shape our views profoundly.   Some scholars speculate that the image of the “blue marble” from space helped trigger the birth of modern environmental law.

And as looking as we’re talking about the blue marble, the NY Times has a neat story about electronic display globes, which can show different global maps or moving images of shifting weather patterns.  The price tag, unfortunately, is a bit steep (about $40K), but prices are expected to drop to a somewhat more affordable level.  And maybe someone down the road in Silicon Valley will come up with an inexpensive spherical computer screen. 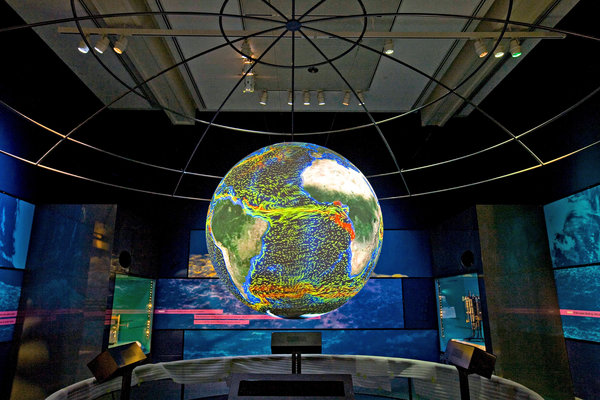 2 Replies to “Envisioning the Earth”