To achieve California and the post-Paris world’s climate goals, we’re going to need a whole lot more renewable energy. Given current market trends, much of it will come from solar photovoltaic (PV), which has gotten incredibly cheap in the last few years. But deploying these solar panels at utility scale will mean major changes to our landscapes. And that means conflicts with traditional environmental and agricultural values.

Here in California, these conflicts could slow the state’s effort to achieve 50 percent of our electricity from renewable sources by 2030. A significant deployment of large-scale solar PV will occur in places like the San Joaquin Valley, an agriculturally rich region with lots of solar exposure (insolation) but tremendous poverty and air pollution. To date, many proposed solar PV projects in the region have engendered conflict with agricultural and conservation groups, who fear a resulting loss of valuable lands and the species and farming and ranching that depend on them (a subject of a 2011 joint UC Berkeley/UCLA Law report, funded by Bank of America, called Harvesting Clean Energy). 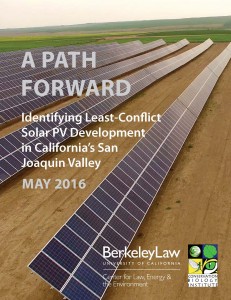 We asked the groups one question: from your perspective, where are the least-conflict lands for solar PV development in the Valley?

And here is where technology came into play. To answer this question, the group worked with CBI’s cutting-edge but straightforward on-line mapping platform, called Data Basin Gateway. This new mapping software allowed for real-time, group-supported mapping as the stakeholders were free to input their own data and share the results, privately at first among their group, and then with the larger stakeholder groups.

Once we overlaid the various stakeholder groups’ final maps, the result was pretty remarkable:

To be sure, not all of this land, on further inspection, may be practical or feasible for solar PV development. But if even a fraction works, it will accelerate the state’s renewable efforts and reduce the impact of air pollution on Valley communities. Perhaps even more encouraging, this entire process took less than six months, and the resulting maps remain on-line on the San Joaquin Valley Gateway, where stakeholders can update the maps as new data become available and conditions change over time.

Based on the results, CLEE urges policy makers to encourage solar expansion on these optimal lands and streamline the planning processes to steer more solar PV development there. Such efforts could include:

CLEE also encourages policy makers to support similar mapping processes throughout the state and eventually for a multi-state effort across the United States. There’s no reason this same process can’t work for a statewide mapping effort and more, or even for technologies beyond solar PV. After all, we’ll need other clean technologies in addition to renewables to meet our climate goals, from energy storage to low-carbon transportation.

To learn more, tune in to a webex briefing from the Governor’s Office today at 4pm (no password required). You can also dial in at 1-650-429-3300, access code 926 702 170. The webex will feature remarks on the report findings from Ken Alex, senior advisor to Governor Brown and director of the Governor’s Office of Planning and Research (and CLEE advisory board member and guest Legal Planeteer), and California Energy Commissioner Karen Douglas (both of whom were instrumental in getting the project launched and implemented).

Finally, I encourage readers to review the full report and note the list of stakeholders and others involved to bring this project to fruition, including generous contributions from the Energy Foundation, The Nature Conservancy, and others.

Let’s hope this work not only helps resolve conflicts in the San Joaquin Valley to bring more renewable energy on-line but also inspires similar smart planning efforts for clean technology throughout California and beyond.