With governor’s signature, the state will retain its international leadership position on reducing greenhouse gas emissions

It was a rough year in 2015 for SB 32 (Pavley), California’s major climate bill to extend our greenhouse gas reduction efforts to 2030. The bill went down without a vote on the Assembly floor, due to opposition from “moderate” Democrats.

But today, the Assembly passed the bill with 42 votes in favor, 29 opposed: 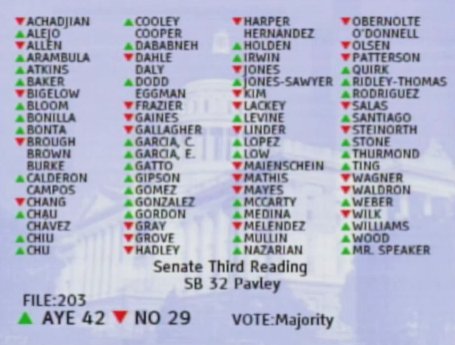 This majority vote won’t inoculate certain programs under AB 32, like cap-and-trade, from court challenges alleging that they constitute a tax requiring a super-majority vote. But the bill gives the California Air Resources Board authority to implement command-and-control regulations, if market-based alternatives are challenged.

With the state senate already passing SB 32, the governor will sign soon, and California’s position as an international leader in reducing greenhouse gas emissions will continue.

UPDATE: As David Holtzman noted in the comments, SB 32 is tied to the passage of AB 197, which is still up for a vote.