California isn’t building enough housing to meet population growth, while the new housing that does get built is happening too often in the wrong places, like on open space far from jobs. Meanwhile, new climate legislation for 2030 will likely rely on the average Californian reducing his or her driving miles by allowing residents to live closer to jobs and services.

So how do we reconcile these two trends?

Certain leaders in the building industry — primarily sprawl developers — have cried gloom and doom, claiming that the state’s climate goals will drive up costs for everyone and result in less housing getting built. 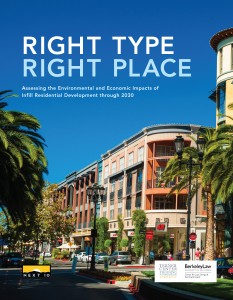 But a new report released today from UC Berkeley Law’s Center for Law, Energy and the Environment (CLEE) and the Terner Center for Housing Innovation at UC Berkeley, commissioned by Next 10, found the opposite result.

Right Type, Right Place is the first academic, comprehensive evaluation of the potential economic and environmental impacts of infill housing development — compact housing in already urbanized land near transit, jobs and services — on California’s 2030 climate goals under Senate Bill 32 (Pavley). We examined three scenarios: business-as-usual housing development, a “target” infill scenario with more multifamily and attached housing in close-in neighborhoods near rail transit, and a mixed scenario in between the two.

While the business-as-usual scenario results in more car-dependent housing farther away from jobs and schools, the infill target scenario meets the same demand, spurring economic growth with a much smaller carbon footprint. Target scenario benefits include:

But this development won’t happen on its own. It’s not because of market forces though. Most people would like a walkable neighborhood close to more amenities, and many households (particularly without children) simply don’t need a big suburban house, with all the upkeep and costs.

But many local governments simply don’t allow this kinds of housing to get built, and the state has been lax on trying to force their hands and address the housing shortage and traffic problems. Meanwhile, in under-performing markets near transit, the state has not provided local governments with the needed financing tools to jumpstart private investment.

As California lawmakers consider over 130 bills this year to address the state’s housing crisis, the report provides several recommendations for policymakers to consider, such as reducing barriers and increasing incentives for regions that generate infill housing, creating anti-displacement policies to protect affordable housing, and directing more funds towards public transit and affordable housing.

You can access the report via CLEE’s website or Next 10. So far, the report has gotten media coverage from outlets such as the Los Angeles Times, San Jose Mercury News, and Sacramento Business Journal. I also co-authored an op-ed on the report in today’s Capitol Weekly, along with Next 10’s Noel Perry and Terner Center’s Carol Galante, which summarizes some of the findings.

Hopefully the report will inform housing debates going forward, resulting in a California that builds enough housing to meet environmental goals while benefiting the economy at the same time.

4 Replies to “Where Should We Build New Housing In California To Meet 2030 Climate Goals?”