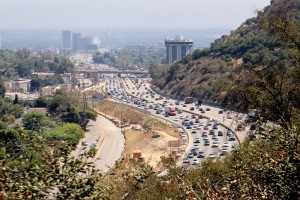 Two weeks ago the California legislature did what many have been hoping for at the national level: pass an infrastructure bill. The issue was the state’s nearly $60 billion backlog in deferred maintenance for our transportation infrastructure.

But rather than deficit spend or raid other programs, the legislature took a politically brave step with SB 1 (Beall) of raising gas taxes and vehicle registration fees to pay for this work. It took a two-thirds super majority, which meant no room to spare on votes.

From an environmental perspective, the plan is good because it generally doesn’t pay for new capacity, just repairs and maintenance of existing infrastructure. The money will also help fund transit and bicycle and pedestrian infrastructure.

Environmentalists complained about a weakening of standards for truck drivers to retrofit or retire their dirtiest vehicles, but those impacts could potentially be blunted by tightening other environmental standards related to fuels and pollution limits. Some also objected to the new annual electric vehicle fee ($100) per year, which could discourage consumer adoption. But that fee seems relatively modest for vehicles that contribute to wear-and-tear on the roads.

The primary criticisms of the plan boiled down to the following:

1) California should spend its existing dollars more efficiently. Republicans and even one Democrat took this approach, arguing that “Caltrans reforms” could save us an equivalent amount of money. However, none of them to my knowledge spelled out exactly how much money could be saved and how from these reforms. I also don’t know of any study that has attempted to quantify potential savings. As a result, this criticism struck me as ideological posturing, along the lines that eliminating foreign aid and welfare could help balance the federal budget, when those programs are a mere pittance compared to military and insurance spending.

2) California should devote high speed rail money to deferred maintenance instead of funding this unpopular train project. Democratic state senator Steve Glazer (the one democrat in the senate to vote against the measure) made this argument, which is inaccurate and false. High speed rail is funded by state bond money, approved by the voters, that cannot legally be diverted to other uses. Additional federal dollars are also reserved solely for train projects. Some cap-and-trade auction proceeds are directed to high speed rail and could theoretically go to other transportation uses, but these are only a few billion dollars at this point, hardly anywhere close to the $60 billion or more that we need. Plus, those funds should go to projects that reduce greenhouse gas emissions, which high speed rail will do once it’s built and operational, whereas highway investments have the opposite impact.

3) California should find the money from existing transportation revenues that are instead spent on the general fund or other non-transportation sources. I’m admittedly less familiar with how transportation revenues are spent in the state, and in concept I would support efforts to ensure that dollars collected from transportation go to transportation improvements. But the critics, to my knowledge, presented no hard numbers on how much could be redirected to address the funding needs. So it was hard to take this criticism too seriously.

4) Californians already are overtaxed on transportation. Not when it comes to the gas tax and spending for road maintenance. The existing state and federal gas taxes have not kept up with inflation, and as vehicles become more fuel efficient, the revenues will continue to fail to keep up with usage. In short, most drivers are actually getting a cheap ride when it comes to paying for their fair share of road repair, minus the bills they have to pay to repair their cars from hitting potholes.

Overall, SB 1 is an important spending bill that should help the environment to some extent, while also providing a fiscal stimulus in rural communities through the repair work. Higher gas taxes could also marginally dissuade people from buying gas guzzlers, although the taxes are relatively minimal compared to the price of gasoline.

But don’t expect this kind of action at the federal level, barring unlikely bipartisan cooperation with the Trump administration. That’s because raising taxes and fees isn’t popular, and it takes courage to do so when the need is great. And that kind of courage and foresight, which we just saw in California, is in short supply at the federal level.