As Cara posted, the California Legislature scored a super-majority victory last night to extend the state’s signature cap-and-trade program through 2030. It was a rare bipartisan vote, although it leaned mostly on Democrats. 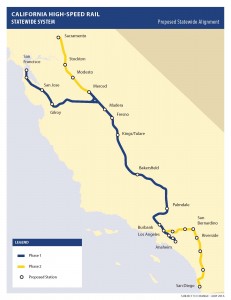 Lost in the politics is what this means for high speed rail. The system has a fixed and dwindling amount of federal and state funds at this point, and it’s relying on continued funding from the auction of allowances under cap-and-trade to build the first segment from north of Bakersfield to San Jose and San Francisco.

If the auction was declared invalid or ended at 2020 with depressed sales, the system would be in major jeopardy of collapsing before construction even finished on the first viable segment. Now it has some assurance of access to funds.

But of course it’s not that simple. The bill that passed yesterday has diminished available auction funds set aside for the programs that have been funded to date with cap-and-trade dollars. As part of the political compromises, more auction money will now go to certain carve-outs, like to backfill a now-canceled program for wildfire fees on rural development, as Eric noted.

And another compromise may put a ballot measure before the voters, passage of which would require a two-thirds vote for any legislative spending plan for these funds going forward. That means Republicans — who generally hate high speed rail — would be empowered to veto future spending proposals.

Still, high speed rail once again has a lifeline, as do the other programs funded by cap-and-trade, such as transit improvements, weatherization, and affordable housing near transit. It’s an additional victory beyond the emissions reductions that will take place under this extended program.