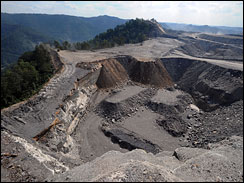 EPA is finally flexing its muscle on mountaintop removal mining, taking on the Corps of Engineers and stepping in for states that have been reluctant to attack the practice.

Mountaintop removal mining involves blasting the tops off of mountains, typically in Appalachia, to get at coal. The ecological problems are less about removal of the mountaintops than about the filling of valley streams with the excess spoils. The practice has been going on for more than 20 years with very little regulatory oversight and in apparent disregard of the Clean Water Act.

In 2002, the Bush administration gave the valley fills associated with mountaintop removal mining a semblance of legality by revising the regulations governing the issuance of permits for filling waters of the U.S. under section 404 of the Act to allow filling with overburden from mining operations. Even with that change, large-scale valley fills would seem to violate the Clean Water Act’s prohibition on the issuance of federal permits that would lead to a violation of state water quality standards, and the Guidelines for section 404 permits developed by the Corps and EPA, which require that impacts on aquatic ecosystems be avoided and minimized to the maximum extent practicable. Nonetheless, environmental groups have been unsuccessful in their long-running campaign to halt mountaintop removal mining through litigation. In the latest round of that battle, as Dan noted earlier, the Fourth Circuit last month upheld the issuance of four valley fill permits in West Virginia.

Now EPA has sent strong signals that it intends to crack down on valley fills. Two different EPA regional offices have sent letters to the Army Corps of Engineers objecting to the Corps’ plans to approve permits in Kentucky and West Virginia. EPA Region 4 has requested that the Corps require additional mitigation for the Kentucky project. Region 3 has gone further with respect to the West Virginia project, asking that the Corps flat-out deny the permit. And according to the Associated Press, EPA has put hundreds of other mountaintop coal-mining permits on hold, “saying it wants to evaluate the projects’ impact on streams and wetlands.”

If it follows through on these letters and the other pending permits, EPA has significant authority to block mountaintop mining. Under section 404, EPA can veto any permit issued by the Corps if it finds that the permitted activity will cause an unacceptable adverse environmental impact. Although it did not explicitly threaten a veto on the West Virginia project, EPA did say that it sees the project as having “high potential as a candidate” for a veto. Of course, the Corps also has the authority, and indeed the duty, to deny valley fill permits where the fill will impair downstream water quality. Perhaps the Corps will take EPA’s letters as an excuse to reconsider its past cavalier indifference toward the effects of valley filling.

The Appalachian states which suffer the harm of mountaintop removal and valley fill also have complete authority to halt the practice. Section 401 of the Clean Water Act requires state certification that water quality standards will not be violated before a federal permit may be issued. The Corps has used that requirement to avoid undertaking its own independent inquiry into the effect of a permit on water quality. At the same time, states like West Virginia have been unwilling to buck the Corps’ permit proceedings, instead simply providing that the Corps must ensure compliance with their water quality standards in issuing permits. Now that EPA has declared that its investigations have shown significant downstream impairments from valley fills, that little pas de deux has been exposed for the farce it is.

These letters are certainly not the last word on mountaintop removal mining, as NRDC’s Rob Perks points out. Legislation to end the practice of permitting valley fills under section 404, introduced in the Senate by Cardin (D-MD) and Alexander (R-TN) and in the House by Pallone (D-NJ) with 132 co-sponsors, is one possible long-term answer. That would mean that permits would have to be evaluated under the somewhat more demanding standards of section 402, the part of the Clean Water Act that usually applies to disposal of industrial waste. In the meantime, though, it is encouraging to see the administration taking steps to actually enforce the requirements of section 404.

Late last night, the EPA issued an unusual statement saying that the agency “is not halting, holding or placing a moratorium on any of the mining permit applications.” But the statement indicated that the EPA would “take a close look” at applications that had been the focus of recent litigation.

3 Replies to “EPA asserts itself on mountaintop removal mining”