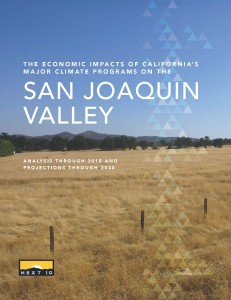 Climate policies are under political attack, both in California and nationally. The common argument is that these policies hurt the economy and destroy jobs, particularly in disadvantaged communities.

To assess those claims, the Center for Law, Energy and the Environment (CLEE) at UC Berkeley Law and UC Berkeley’s Donald Vial Center on Employment in the Green Economy, working with the nonpartisan nonprofit Next 10, released today the first comprehensive cost/benefit study of climate policies in the San Joaquin Valley, one of California and the nation’s most economically and environmentally vulnerable regions.

The Economic Impacts of California’s Major Climate Programs On The San Joaquin Valley specifically looked at the impact of cap-and-trade, renewable energy, and energy efficiency programs in the eight-county region.

Why the Valley? Simply put, if climate policies can work in this region, they can work anywhere. In addition, the region’s elected leaders have asked questions about the impact of climate policies on their constituents, raising their concerns both in the state legislature and now nationally in the congress.

After examining the data and using advanced modeling software, we found that these three programs (among the most important in California’s suite of climate policies) brought over $13 billion in economic benefits to the Valley, mostly in renewable energy, and created over 31,000 jobs just in the renewable energy sector alone.

With the relatively new cap-and-trade program, we found that despite the compliance costs in the heavily industrial Valley, the benefits from state spending of the allowance auction proceeds outweighed those costs, particularly due to construction of high speed rail, which is funded in part with these funds. Furthermore, once the state disburses proceeds already collected from the auction, those benefits will increase greatly.

The overall benefits to the Valley are likely to continue and grow through 2030, as the state strives to meet its newly legislated climate goals for that year, via last year’s SB 32 (Pavley) and SB 350 (De Leon, 2015). Those efforts will require at least 50% renewables by 2030, a doubling of energy efficiency in existing buildings, and a more robust cap-and-trade program.

However, the benefits of cap-and-trade may cease if litigation over the auction mechanism (described by Ann Carlson at UCLA Law) is successful, as that mechanism allows the state to spend the proceeds that provide the benefits. Furthermore, federal action to undercut renewables and energy efficiency could also slow the gains.

Ultimately though, California is committed to its path and these programs through bipartisan legislation and regulations. Given the economic data we see in this study, its a path that the state should continue — and it can hopefully now inform federal debates about environmental policy and the need for job-producing programs.

You can access the full report via CLEE or Next 10’s websites, and check out partial media coverage in the Los Angeles Times, Central Valley Business Times, and Capitol Public Radio.